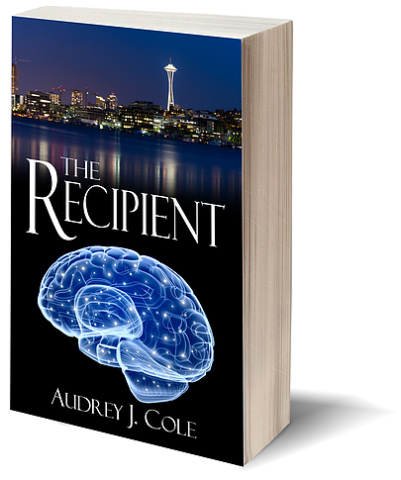 Audrey J. Cole is a registered nurse and a writer of thrillers set in Seattle. Although born and raised in the Seattle area, Audrey now lives with her husband and daughter in Port Stephens, Australia. Her debut thriller, The Recipient, is the first book in a series of Emerald City Thrillers and will be available on Amazon June 13.

Sergeant Wade McKinnon knows who killed Samantha the moment he arrives at her crime scene. Problem is, he watched her killer die a year ago.

A year after serial killer Michael Rhodes is executed and allowed to donate part of his brain as an organ transplant, Wade gets called to a murder scene that shares uncanny similarities to those of the late Michael Rhodes. Other similar killings happen around Seattle, and Wade seems to be the only person still alive who knows enough about Michael Rhodes’s murders to be able to replicate them. When evidence found at one of the crime scenes points to Wade as the killer, he races to find the real culprit before it’s too late to clear his own name.

Elle is overjoyed when her husband, Brian, gets a second chance at life when he receives a partial brain transplant after suffering a debilitating stroke at the age of thirty-seven. Their lives seem to return to normal, but Elle notices a disturbing change in Brian’s behaviour. When Elle learns that her husband’s brain cell transplant came from serial killer Michael Rhodes, she fears that Brian now has the mind of a serial killer.