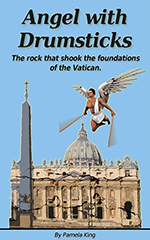 This is the story as it was told to the author by Angelo Ferrari, drummer, singer and founder of the Italian Beat rock group Angel and the Brains.

After recounting how the band was formed and its music ambitions, it continues to tell the true story about the aftermath of La Messa Dei Giovani (La Messa).

La Messa was conceived to fulfil the desires of the Vatican II to make the Catholic Church more appealing to young people but, because of resulting bitter and vicious arguments within the church and the media, the Vatican took a course of action that was inconsiderate, hurtful and cold hearted.

The story describes how these young musicians, who had responded to an invitation from the church to perform the first rock mass in Rome had their fledgling careers destroyed by the Vatican.

The reader will discover that many articles written in recent years are wrong in their descriptions of what happened following La Messa and falsely acclaim the event as being a successful innovation of the Catholic Church at the time.